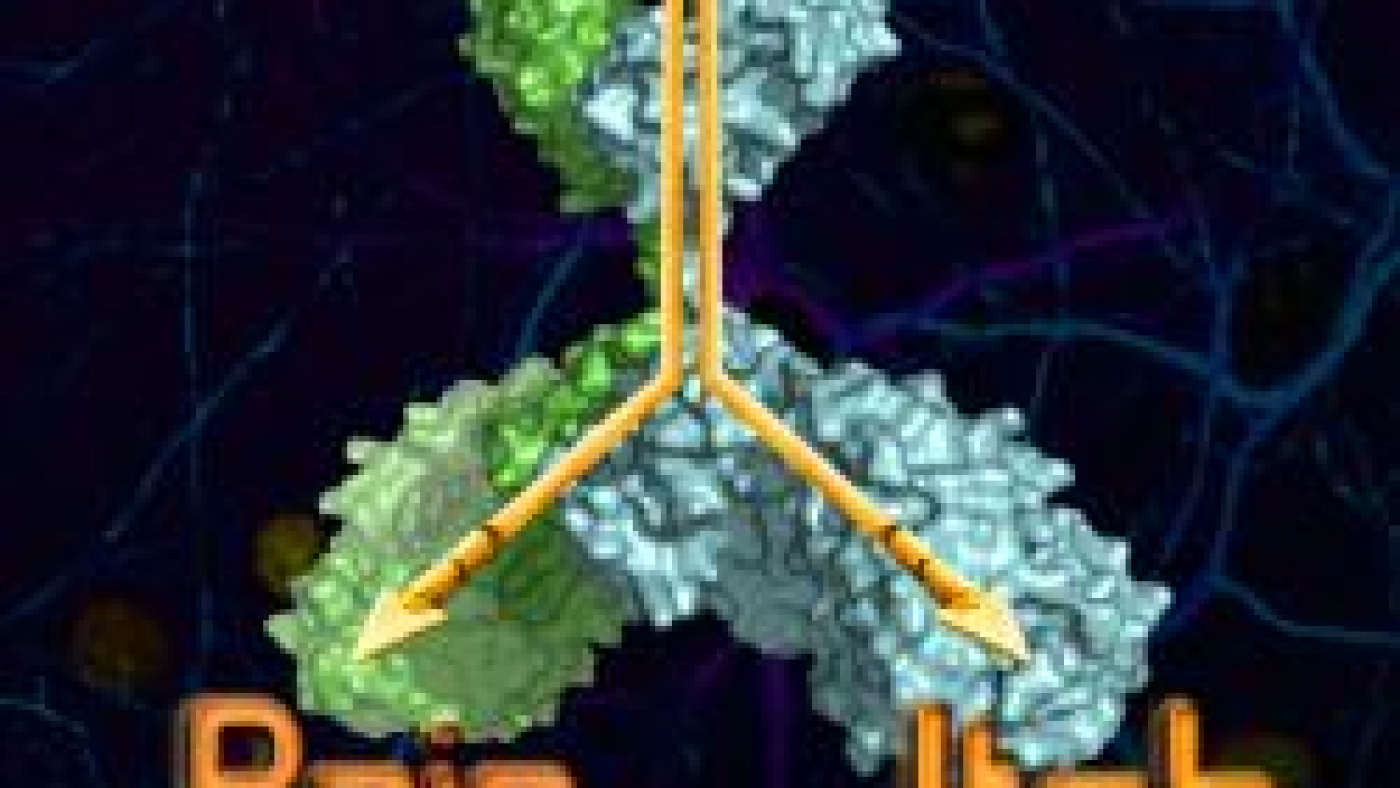 Both Pain and Itching Blocked by One Molecule

An antibody that specifically blocks the NaV1.7 voltage-gated sodium channel and suppresses pain in mice has surprisingly been found to also suppress itching in mice, even though pain and itch sensations usually follow different paths. (Source: Seok-Yong Lee and Ben Chung, Duke University) Duke University researchers have found an antibody that simultaneously blocks the sensations of pain and itching in studies with mice.
The new antibody works by targeting the voltage-sensitive sodium channels in the cell membrane of neurons. The results appear online in Cell.
Voltage-sensitive sodium channels control the flow of sodium ions through the neuron’s membrane. These channels open and close by responding to the electric current or action potential of the cells. One particular type of sodium channel, called the Nav1.7 subtype, is responsible for sensing pain.
Mutations in the human gene encoding the Nav1.7 sodium channel can lead to either the inability to sense pain or pain hypersensitivity. Interestingly, these mutations do not affect other sensations such as touch or temperature. Hence, the Nav1.7 sodium channel might be a very specific target for treating pain disorders without perturbing the patients’ ability to feel other sensations.
“Originally, I was interested in isolating these sodium channels from cells to study their structure,” said Seok-Yong Lee, assistant professor of biochemistry in the Duke University Medical School and principal investigator of the study. He designed antibodies that would capture the sodium channels so that he could study them. “But then I thought, what if I could make an antibody that interferes with the channel function?”
The team first tested the antibody in cultured cells engineered to express the Nav1.7 sodium channel. They found that the antibody can bind to the channel and stabilize its closed state.
“The channel is off when it is closed,” Lee explained. “Since the antibody stabilizes the closed state, the channel becomes less sensitive to pain.” If this held true in live animals, then the animals would also be less sensitive to pain.
To test this idea, Lee sought the help of Ru-Rong Ji, professor of anesthesiology and neurobiology, who is an expert in the study of pain and itch sensation. Using laboratory mouse models of inflammatory and neuropathic pain, they showed that the antibody can target the Nav1.7 channel and reduce the pain sensation in these mice. More importantly, mice receiving the treatment did not show signs of physical dependence or enhanced tolerance toward the antibody.
Read Full Story here
Source: Duke University